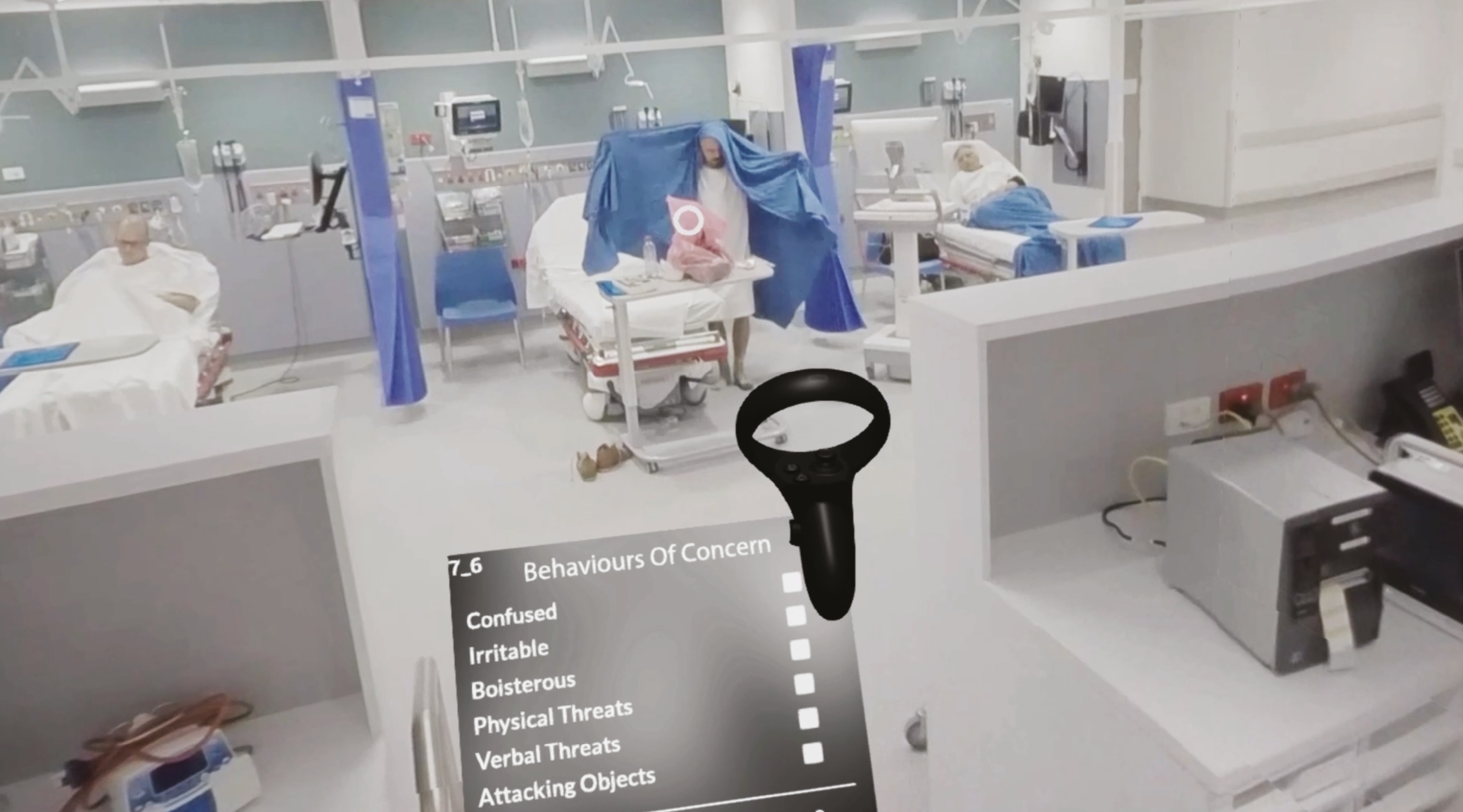 A fifth of healthcare professionals experience violence perpetrated against them every year by patients or their family members [1]. In response to the violence and aggression challenges faced in the Western Sydney Local Health District (WSLHD), we conducted a study to identify clinician experiences to guide the restructuring of the Code Black response framework [2]. This study revealed several challenges and limitations to the existing training processes which would require a complete restructuring, one of which was training delivery. Current training is resource intensive with clinicians facing long wait times to attend. Hence, 25% of those interviewed had not attended any training in violence management and prevention. Importantly, we identified key aspects of the training package that could be enhanced using virtual reality (VR)-based simulation.

We have been exploring the use of VR to supplement clinical educational processes in areas including Advanced Life Support [3], Dignity in the Workplace and Clinical Communication. This body of research has resulted in a framework to guide the development of VR-based modules for clinical education based on key design factors [4]. We identified key findings from our study [4] to support Code Black training using VR-based simulations.

The Code Black VR course was developed to supplement the redesigned Code Black training programme delivered across WSLHD, deployed on the Meta Quest 2 headset (available from https://store.facebook.com/au/quest/products/quest-2/; Meta, California, USA) to be used both in the clinical setting and loaned out to clinicians. The Code Black VR course consists of four distinct approaches to VR-based education.

Expert clinicians were filmed modelling gold standard de-escalation techniques with an actor demonstrating varying stages of violence and aggression. While these videos do not require VR, they provide compelling resources as the user is engaged with the application.

Feedback from clinicians highlighted that some were unprepared for the first time they witnessed the co-ordinated physical and chemical restraint of a patient [2]; 360-degree video allows the user to be at the centre of the scenario and were filmed from the perspective of a team member. This enabled the user to explore the planning of a Code Black response, physical and chemical restraint and post event debriefing with spatial fidelity.

Some staff interviewed felt that violent incidents ‘came out of nowhere’ [2]. As part of the Code Black rollout, a Behaviours of Concern (BOC) chart was deployed into practice to support the rapid standardized observation of patients to identify the risk of violence or aggression [5]. We developed an innovative approach to train situational awareness and documentation using the BOC chart. Actors were hired to occupy beds in the Emergency Department at Westmead Hospital. These actors portrayed varying levels of aggression over an 8–10 minute scene. Each two-bedded location was aligned with one of the lenses on the 360-degree camera. Those individual lenses were then isolated in post-production and spliced into two-minute segments. These two-minute segments were then set to ‘auto splice’ together producing a randomized two-minute 360-degree video. An interactive BOC chart was embedded in the videos so real-time observations could be performed on the patient. Automated results report user performance post scenario completion (i.e. identified and missed behaviours of concern).

To allow clinicians to practice verbal de-escalation skills, a VR-based, artificial intelligence (AI)-driven conversational agent was created. The AI was developed with a back story of being a concerned family member whose father has chest pain but is yet to be seen by the doctor. The user can talk to the avatar, and the avatar becomes more or less agitated depending on what verbal input the user provides. User performance is recorded to provide immediate feedback after the simulation is completed. 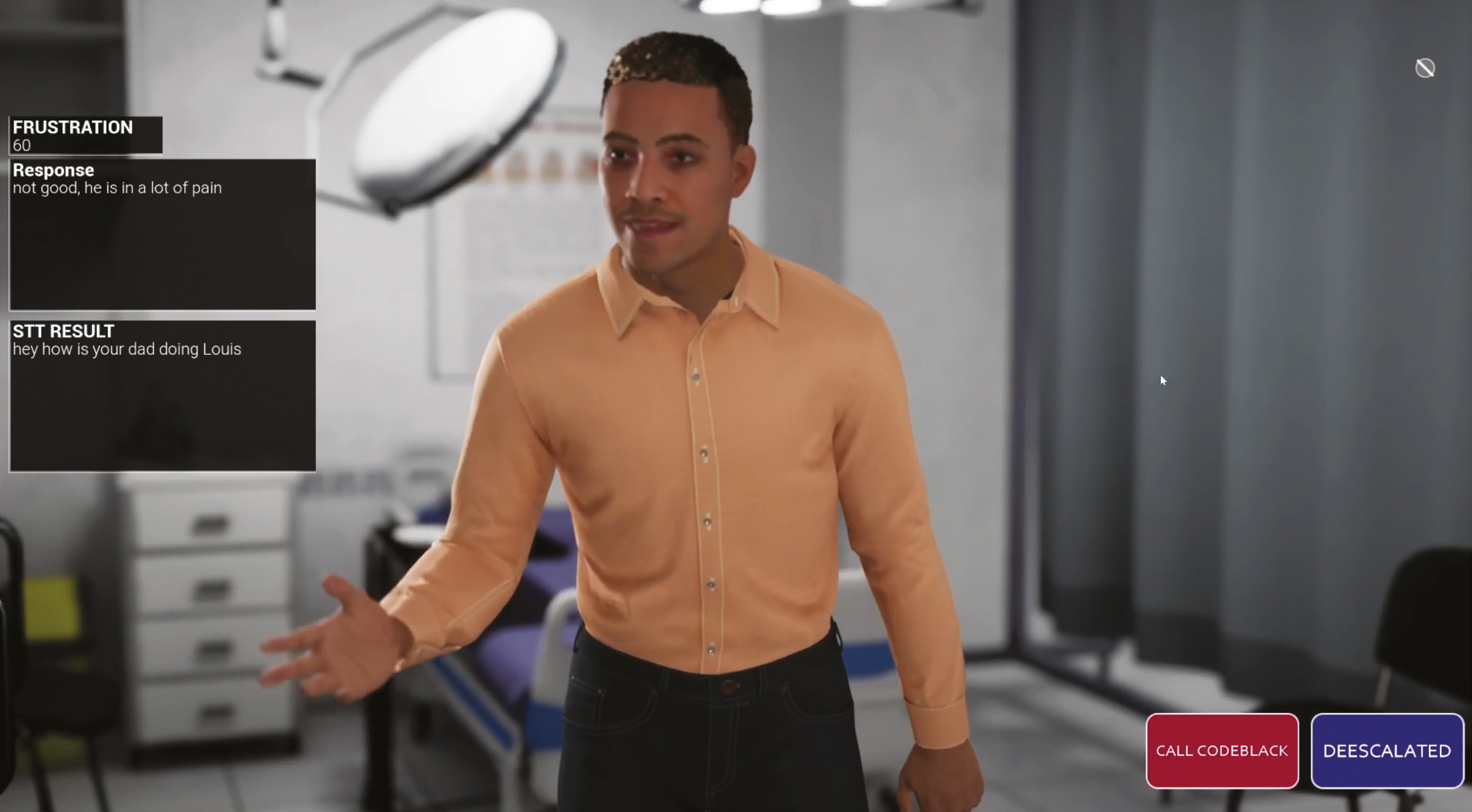 Formal evaluation of the project will be conducted as part of the broader research project in the coming months. User satisfaction will be determined using in-app and post-use surveys and interviews. Violence and aggression key performance indicators such as number of incidents, time in restraint and overall restraint use will also be reviewed post intervention.

The 360-video components of the VR application have been piloted as part of the broader Code Black training programme. It has been well received by users with high levels of satisfaction verbally collected to date. The verbal de-escalation trainer is in the early stages of development, and we have conducted initial trials which were well received. The findings from these trials have provided guidance for further improvement and development before a broader release.

Future steps of our VR-based Code Black solutions include:

Availability of data and materials

Ethics approval and consent to participate

Exploring staff experiences: a case for redesigning the response to aggression and violence in the emergency department. International Emergency Nursing. 2021 Jul;57:101017. 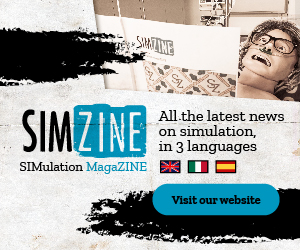